I write this open letter in the wake of the Derek Chauvin verdict. I intended to write last week but found I could not. For me, it was hard to celebrate the outcome as a “victory.” Victory would undo George Floyd’s murder. It would mean that guilty verdicts in cases where cops kill unarmed people would be unexceptional. And yet, as telling and tragic as this fact may be, Chauvin’s guilty verdict was a milestone, an occasion where massive public pressure, an aggressive prosecution, the breaking of the “blue wall,” and the cell phone footage shot by then- 17-year-old Darnella Frazer combined to define Chauvin’s actions as cold blooded murder.

I did not write to you last week because it seemed wrong, even callous to mention George Floyd and not Ma’Khia Bryant, who at 16-years-old was gunned down by a police officer in Columbus, Ohio. Or Adam Toledo, a 13-year-old gunned down by Chicago police while raising his hands in surrender. Or Daunte Wright, killed during the Chauvin trial, when a police veteran allegedly mistook a gun for a taser. Or Andrew Brown Jr. killed by police in his own driveway with his hands on the steering wheel of his car. All these murders happened this month. In April. April.

I did not write to you because the same day that Chauvin’s verdict was announced, my son’s principal left a voicemail telling me that my 10-year-old was called the n-word by a classmate for winning a soccer game. This was upsetting but not surprising. Being called the n-word is a rite of passage for Black people, so much so that my husband and I had already prepared my son for it. While I sat there streaming the trial verdict, I was also deciding how best to discuss this with my boy. I was also composing, in my head, an email to the principal that asked how SCASD reports and responds to hate speech, how the district addresses collective harm rather than punishing individual wrong?

On Friday, just as I sat down to write again, I learned that the Martin Luther King Jr. memorial on Fraser Street had been vandalized by a white nationalist group. Somehow that event temporarily broke me. I was (am) exhausted, and at that point, I decided to remain silent. Let others write their commentaries. I would sit back, hold my family close and attend to the pile of sometimes boring but necessary work that makes our department run.

But then yesterday morning I learned that an AFAM faculty member and her husband found a rope clumsily tied into the shape of a noose on a tree right outside their house. It was a deliberate, disgusting and cruel effort to intimidate and terrorize the only Black family on the block. It was designed to teach an all-too-familiar lesson: Step out of line and we will hurt, maim or kill you. We, the noose said, can wield symbols of oppression with impunity.

Reflecting on the work this department has done to recruit faculty and students of color, it no longer seemed possible to remain silent. I felt I had to bear witness, to affirm that African American Studies will not be cowed, isolated, or shamed into remaining silent. The shame belongs to those who perpetrate, defend or tolerate such acts. My job as an administrator, faculty member, activist, wife and mother will never be to protect the reputation of Penn State, State College, SCASD or any other entity that speaks in the language of Diversity, Equity and Inclusion without doing the hard, painful work of creating a truly equitable, anti-racist, anti- sexist, anti-transphobic, pro-immigrant climate.

My job is to bear witness to the fact that the Trump years have cost us dearly. They unleashed a kind of bigotry and violent nationalism that has always been present but has often been couched in less incendiary terms. But make no mistake the recent hateful acts here and around the country – the murder and brutalizing of Asians and Asian Americans, the hundreds of anti-trans bills making their way through state legislatures, the efforts to suppress Black voting rights – are of a piece. They are a focused, if not coordinated, response to a perceived attack on white supremacy. The conviction of one white police officer and the election of a woman of Afro-Asian descent to the Vice Presidency has spurred on the anger and fear harbored by too many white people.

Even if the Chauvin verdict feels like a very small step toward accountability and justice, it also feels like a turning point. It feels like a moment during which we have snatched victory out of the jaws of defeat. It feels like a moment to shed tears and to honor our ancestors’ will to survive. It feels like a moment where we must once again affirm our commitments: We will always call out forms of individual and state-sanctioned violence wherever they appear. We will name them, resist them and fight to eradicate them. We will teach, research and write about histories of struggle that have sustained generations and inspired freedom fighters around the world. We will call out symbolic gestures that stand in for concrete, measurable anti-racist outcomes. And in so doing, we will reassert that Black creativity, Black autonomy, and Black resilience in the face of everyday and spectacular racism is both our birthright and our responsibility. 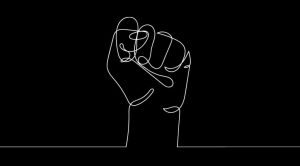